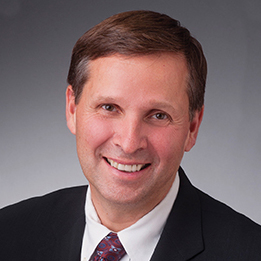 A Vision for Growth

Please join WithumSmith+Brown’s CEO and Managing Partner, Bill Hagaman, who will share the story of the public accounting firm’s successful growth journey from five people in a small town office to nearly 1,000 team members in six major metropolitan regions. Having consistent year-over-year revenue and size growth since inception in 1974, Withum currently ranks as the 26th largest public accounting firm in the nation and can boast one of the best staff retention rates in the profession.

Bill has been with Withum for nearly four decades, starting at the bottom of the corporate ladder as a staff accountant in 1980, rising through the ranks to Managing Partner in 2010. His leadership style is the driving force behind the firm’s Vision 2020 strategic plan for continued success, and the influence of a culture that empowers its people with the tools and opportunities they need to succeed and thrive, both personally and professionally.

Bill will share his experiences and recommendations for managing through growth, which every CEO can appreciate.

Bill is the Managing Partner and Chief Executive Officer of WithumSmith+Brown, PC, and has been a member of the firm’s management for over 30 years. He is a licensed certified public accountant in New Jersey, New York and Florida, as well as a Chartered Global Management Accountant (CGMA), specializing in merger and acquisition services and international business.

A graduate of Richard Stockton College of New Jersey with a bachelor’s degree in accounting, Bill joined Withum in 1980. He is a member of the American Institute of Certified Public Accountants (AICPA) and the New Jersey Society of Certified Public Accountants (NJSCPA). He has also demonstrated a leadership role in expanding the firm’s global capabilities, serving as a current executive committee member of HLB International and as the former chairman of Nexia International USA – both of which are worldwide networks of independent accounting firms and business advisors.

Bill’s professional and philanthropic involvements at both the local and state levels are exemplary. He is currently a member of the Executive Committee of the Board of Trustees of the Francis E. Parker Memorial Home; Treasurer of the Hyacinth AIDS Foundation; and a member of the Executive Committee of the Board of the NJ State Chamber of Commerce. Bill is former Chairman and current Treasurer of the New Brunswick Cultural Center, Inc., and former Chairman of the George Street Playhouse. In 2010, Bill received the Thomas H. Kean Arts Advocacy Award, honoring him for his dedication to the arts. Past roles include Vice President of Ocean Day School, Inc. and membership with the Kiwanis Rotary and the Jaycees. In 2002, he was appointed to serve on the BEST Commission (Budget Efficiency Savings Team) for the state of New Jersey. A longtime Treasurer and former Chairman of the Middlesex County Regional Chamber of Commerce, Bill was honored by the MCRCC as a “2002 Community Leader of Distinction.” He has also coached his children’s little league, basketball and in-line hockey teams.

Bill has appeared on several television and radio programs discussing topics related to leadership and business management, including appearances on Steve Adubato’s television show, “NJ Caucus,” News 12 New Jersey television show, “New Jersey Business,” and Executive Leaders Radio. He is frequently quoted in accounting and business publications, and has authored many articles over the years on topics ranging from fixed asset management to mergers and acquisitions to leadership within the profession.

Bill is a “local” at the Jersey Shore, residing in Monmouth County, NJ.