Fountainhead Commercial Capital, a nationwide, nonbank, direct lender specializing in the SBA 504 loan program and low loan-to-value conventional loans, was founded by some of the most experienced and awarded SBA lenders around. The company’s FastTrack504 program enables banks, credit unions and other intermediaries to fully outsource SBA 504 and conventional loans for owner-occupied commercial real estate. The company’s AI-enabled, Pronto, online loan automation and evaluation tool, can issue commercial real estate loan approvals in less than two hours. More information is available at www.Fountainhead504.com or by calling 800-770-1504.

Lifelong Entrepreneur Exits Corporate America to Return to His Roots

Chris Hurn, Founder and CEO of Fountainhead Commercial Capital remembers his first taste of entrepreneurship at are eight. “My parents divorced and I stayed with my mom. We didn’t have a lot of money and I learned then that if I wanted to have anything in life, I had to work hard for it. I started mowing lawns, raking leaves and shoveling snow to make money. From then on, I always had a side hustle. I sold t-shirts in college and even worked at McDonalds when I was 14 to learn their systems and operations. To this day, if I stop for a quick meal at McDonalds, I know when the french fries have been in the fryer too long or not long enough. These lessons, knowledge and experiences are things I still use,” he said.

September 2001 was a pivotal moment for Chris and his journey with entrepreneurship. At the time, Chris was working for Marsh & McLennan Companies and had a successful career in corporate America. He was originally scheduled to be on a work trip to New York City and in a meeting in the first World Trade Center tower. Just a few days earlier his daughter was born and he canceled his trip to NYC to be with his family. After later watching the events of September 11, 2001 unfold and holding his new born baby in his arms, Chris realized he wanted to control his own destiny and decided to put together a plan to get out of his career in corporate America and fully embrace a life of entrepreneurship.

In 2002, he co-founded his first company, a non-bank commercial lender which would grow at a such a dramatic rate that it was named to the prestigious Inc. 500 list and would be a member of the Inc. 5000 for years thereafter. As the Great Recession hit, Chris successfully steered his company through an acquisition by a community bank.  While he preserved the business during tough economic times, he also became an employee again.  Though he held out hope that he could be conform to the conservative ideals of a traditional bank, the entrepreneurial instincts and desires simmered beneath the surface.

Fast forward to 2015, Chris launched his second commercial finance company, Fountainhead Commercial Capital.  Based in Lake Mary, Florida, Fountainhead is a nationwide commercial lender specializing in SBA 504 and conventional loan-to-value loans. Chris wrote the first, and still the preeminent, book on the SBA 504 program back in 2012. He also created the first SBA 504 Loan App, launched the FastTrack504 program which enables banks and credit unions to fully outsource SBA 504 loans to Fountainhead and developed a new loan evaluation system that uses artificial intelligence to provide commercial loan approvals within two hours.

To make his company function really well, Chris has built an exceptional workforce by not thinking traditionally. Chris shared, “we usually don’t hire employees who already work within the financial services industry but rather we find and hire people who have the right attitude, energy and enthusiasm. Once we find those elements in a person, we are willing to invest in training them to get the job done,” he said.

Chris uses the University of Central Florida almost exclusively for his internship program. “I love young people and the energy they bring to the table. Fountainhead is not your typical company. We are very entrepreneurial…we hustle, we work hard and we have a good time. I believe our internships are really more like apprenticeships in that if you pull your weight and show value, you’ll likely be hired into a full-time position,” he said.

Chris came to the Orlando area in March of 1998 through a position he was promoted into while working at GE Capital. He recalled a special feeling about Orlando because of the constant sunshine, beautiful climate and the newness factor of the area. “This area is as beneficial to me as a person is for our business. Since so many people are from outside the area, it has created a very welcoming climate.  It’s a neighborly place, people are helpful and the city is rising with real people and real businesses,” he said.

What it means to be a Florida Companies to Watch Honoree

“We definitely feel privileged to be recognized alongside the other honorees and this gives us more wind in our sails to keep growing. And, the truth is, our company will always do the right thing no matter if we are recognized or not. It’s not just about a paycheck at Fountainhead. We are helping create prosperity for people at all levels. I want to thank our clients and my wife for her unshakable belief in me, my kids for tolerating dad’s weirdness and our employees and referral partners for their contributions to our company.”

When asked about his advice for other entrepreneurs, Hurn said, “Know what you’re getting into. Entrepreneurship is not for everyone and that’s OK. This journey is like a roller coaster, one second, you’re on top of the world and fifteen minutes later you can barely breathe. The good news is neither extreme lasts long.”

Fountainhead Commercial Capital’s impact comes from job creation. Through its SBA 504 loans, which enable small business owners to purchase their commercial property with better terms and conditions, Fountainhead has had a direct impact on adding new jobs and reducing unemployment in many markets where it operates. Since the company’s inception only three years ago, it has reported the creation of 848 jobs in the United States by its borrowers.

In addition, CEO Chris Hurn has personally supported the Wounded Warrior Project for over a decade and currently serves on the Executive Committee of the Young Professionals Organization (YPO) Orlando Chapter. Hurn previously served on the National Federation for Independent Business (NFIB) Florida Leadership Council and the Florida Hospital-Altamonte Board. 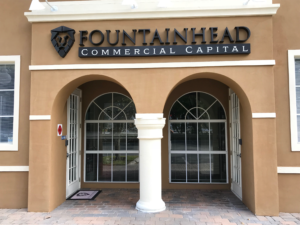