Founded in 2011, U.S. Submergent TechnologiesTM (USST) is the premier service provider for restoring the capacity of wet infrastructure. USST specializes in submergent cleaning from hard-to-clean environments such as tanks and pipes from the following industries: wastewater and stormwater, oil and gas, shipyards, power plants and more.

USST developed the Combination³® Truck to function as a standalone cleaning system powerful and versatile enough to remove accumulated sand, grit and rag material from a variety of submerged conditions. The unique, GritGone Process® generates paint-filter dry sand, ready for disposal, while facilities remain in full operation, meaning no need for bypass pumping.

The proprietary capacity restoration services of USST helps utilities and companies extend the life of their infrastructure and increase efficiencies, saving time, energy, and money, while limiting the need for confined space entry.

With headquarters in Sarasota, Florida and operations based out of Central, Florida, USST is positioned to best service its customers across all areas of the state. For more information, visit ussubmergent.com.

After building a successful 25-year career spanning both public and private sectors, Denver Stutler, Jr. co-founded U.S. Submergent Technologies in February 2011. Prior to 2011, Stutler served as Secretary of the Florida Department of Transportation from 2005 to 2007 and Chief of Staff to Governor Jeb Bush from 2003 to 2005. He also acted as Chief of Staff for the Florida Department of Environmental Protection and early in his career, worked as a civil engineer for an international environmental engineering firm.

Stutler’s unique combination of experience makes him a natural fit to lead a company that has revolutionized infrastructure maintenance by specializing in submergent cleaning and debris removal from hard-to-clean environments. Stutler shared the journey from idea to deployment and some of the challenges and successes they faced along the way.

From startup to second-stage

“Before we even formed the company, I was familiar with the technology,” he said. “We weren’t the original inventors of it, but what we recognized was an opportunity to solve a known problem utilizing the technology. The first year of focusing full-time on the new company involved a lot of waiting and patience. We had to build the prototype and then test it. People had to see it to believe it. After initial testing, we set up a tour and did three different demonstrations to approximately eight utility companies. It was critical that we demonstrate the value. Our solution introduced new technology that overcame some of the limits of previous technology that had been in the market for nearly 45-years.”

In late 2013-early 2014, U.S. Submergent Technologies acquired financial partners that helped take the company to the next level. They purchased a second truck and made the decision after licensing the technology to buy back assets and build a true service-based company. Patents were acquired and Stutler and team retrenched and focused on providing their services to a niche market sector.

“Over time, the unintended consequences of pipes being put together in eight-foot sections is that they shift and ultimately sand and other materials creep in,” Stutler said. “These materials make their way to treatment plants and take up capacity. If we remove just one cubic-yard of sand, we will save utility companies an estimated $3,000 in bricks and mortar to build the same capacity. We’re currently moving 20-to-100-yards per day and we’re able to clean small treatment plants while they remain online.”

Growth is steady, but as Stutler shared, education has been a fundamental part of their success. For the most part, the wastewater market is not aware of how the technology can be deployed. Further, they’re accustomed to either solving the issues with known tools or they’ve learned to live with them. Stutler stressed the importance of U.S. Submergent Technologies maintaining their uniqueness and being careful to not get thrown into the procurement process with more traditional solutions. The company maintains its competitive edge by providing a more powerful dry vacuum than similar companies and offering the ability to pump in wet environments. According to Stutler, the setup offered by U.S. Submergent Technologies is one that you can’t find commercially. They save customers additional money by eliminating the need to bring in additional crews and equipment.

Stutler described the company’s workforce as open and encouraging. New ideas are always welcome and transparency is the norm. Employees are empowered to solve problems and layers are removed to increase speed and efficiency when decision-making. Safety is also of the utmost importance and described by Stutler as being, “just as important as breathing.”

In terms of philanthropy and community involvement, U.S. Submergent Technologies participates in buying tables at Celebration of Reading events and, during the month of October, they donate a percentage of every order to breast cancer awareness and research. They’ve hired interns from local universities and will continue to utilize those relationships to help expand their technology and seek additional patents.

What it means to be a Florida Companies to Watch Honoree

“I’ll be completely honest, I didn’t think we were a company to watch yet,” he said. “That’s certainly the goal, but from my vantage point, it’s been a real slug fest to get to this point. It means a lot and we’re all filled with an enormous amount of pride. It feels great, but we still have work to do.

In terms of why we were selected, I would like to think that the idea of being in a niche and having something different in the market gives us the credentials to be in the ring. We’ve had people not believe in our vision. I’m grateful we didn’t give up. Sometimes waiting takes longer than success.”

Looking ahead, Stutler is focused on taking their solution and scaling it to a national branch service model. Deploying their equipment nationwide will give them a footing in regional markets. They’ll focus on not being all things to all people and just doing what they do best. Providing a valuable service to customers who might not otherwise be able to solve a problem is their ultimate goal and continuing to perfect their equipment and hiring the right talent will accompany that plan.

“We strive to be a place to work where employees feel valued doing work our customers value,” said Stutler.

Stutler offers up some valuable advice for aspiring entrepreneurs: “Some opportunities can be distractions, so be clear about where you’re headed,” he said. “Be purposeful and have patience. Understand what info you need to make a good decision. Also, it’s important to learn from others. If you’re a person that doesn’t, then your opportunities for trial and error will be greater. If someone’s done it before, I’ll take their advice. Lastly, find a good mentor.” 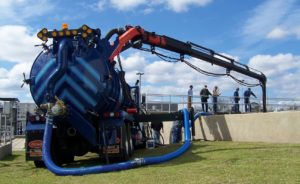