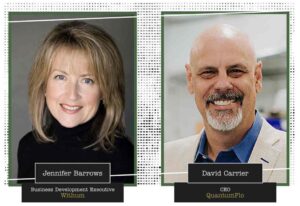 In 2018, after working through a strategic plan for the future of GrowFL, Jennifer Barrows and David Carrier could not have imagined what would happen between then and now. But although the path has not always been straight, mostly because of COVID-19, the results have been very positive, Barrows said.

“Over the course of the last two years, we had to pivot and adjust,” Barrows said. “The pandemic actually provided us the opportunity to rethink things and look for areas of improvement. If it had not happened, we might not have made some of the changes we did that ended up proving out and providing more value to the organization and second-stage CEOs we serve.”

Throughout her term, Barrows guided the organization in its timely and crucial response to COVID-19, launched a new membership model, and developed five key committees all working to better the organization. Perhaps most notably, she spearheaded the efforts for GrowFL to become a 501(c)(3), giving it official nonprofit status.

GrowFL is the only organization in the state that focuses exclusively on supporting the growth of second-stage businesses, a small but mighty group of entrepreneurs that has a significant impact on the state’s economy. Second-stage businesses are those that are beyond the start-up phase and focused on growth. They makeup only 10% of companies but carry 30% of the jobs.

Having led and been involved in other organizations across the state, Barrows says what sets GrowFL apart is the focus on Florida’s entrepreneurs and their growth.

“When you see the passion these CEOs bring to the table, there is an energy that is hard to define or replicate,” she said. “Really, the only way you are going to understand it is to be part of it.”

From her leadership, and the dedication of the GrowFL Advisory Board made up of business leaders across the state, GrowFL is now positioned to support Florida’s entrepreneurs for years to come.

In July, David Carrier, CEO of QuantumFlo Inc., took over as chair of the GrowFL advisory board. As a 2014 GrowFL Florida Companies to Watch honoree, Carrier was recognized as the leader of a standout second-stage company in the state. Just as he was celebrated, it is important to Carrier to further shine a spotlight on the business owners who are moving mountains in Florida.

“One of the main reasons I choose to be a leader of GrowFL is because the organization has been so valuable to me as a CEO,” he said. “Being chair is my way of giving back to fellow business owners.”

Over the next two years as his term unfolds, through his own story, Carrier hopes to inspire fellow CEOs to get involved with all that GrowFL has to offer. One particular program Carrier is focused on is GrowFL’s membership, operating out of four chapters in the southeast, northeast, Tampa Bay, and east-central regions.

“My mission is to show other business owners the value they can gain from being a GrowFL member,” he said. “The learning opportunities to make you and your company better, the added business exposure, or the outstanding networking opportunities, all help to provide CEOs with the tools they need to take their business to the next level. I look forward to leading over the next two years as GrowFL continues to show the world that Florida is the place where great entrepreneurs prosper.”