Florida Business Leaders Inducted into the American Academy of Entrepreneurs 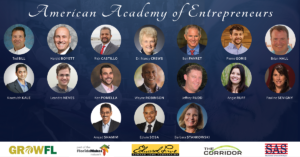 GrowFL is pleased to announce its first group of entrepreneurial leaders inducted into the American Academy of Entrepreneurs (AAE). In September 2020, GrowFL launched the AAE program making Florida only the third state to offer this mentorship program for second-stage businesses.

Hosted by GrowFL, and supported by the Florida High Tech Corridor Council, and Stankowski Advanced Strategies, in association with the Edward Lowe Foundation, AAE brings together a select group of second-stage business owners who benefit from mentoring by experienced entrepreneurs, business management education, and leadership development opportunities.

Edward Lowe believed America was built on the backs of entrepreneurs and was a passionate about supporting them. As an entrepreneur himself and the inventor of Kitty Litter, Lowe understood first-hand the challenges entrepreneurs face. He and his wife, Darlene Lowe, launched the Edward Lowe Foundation in 1985 to provide entrepreneurs with greater support and resources.

“The Florida High Tech Corridor Council is proud to partner with GrowFL and the Edward Lowe Foundation to support the American Academy of Entrepreneurs program,” said Paul Sohl, Rear Adm. USN (ret), CEO of the Florida High Tech Corridor Council. “Seeing the relationships grow between the mentors and mentees over the past few months and the impact it has had on both sides has been incredible to watch. This is only the first Florida co-hort to participate but I think this group was only a testament to how beneficial this program is going to be for the entrepreneurs to come.”

“It was a great honor to participate in The American Academy of Entrepreneurs. As a mentor, I gained a broader perspective and learned a great deal from my mentees. I was inspired by their passion, enthusiasm and determination,” said Barbara Stankowski. “Their progress over the six months in tackling issues and focusing on goal achievement was impressive. It was a great experience all the way around.”

The American Academy of Entrepreneurs is a continuation of Lowe’s efforts to ensure the success of second-stage businesses, a significant source of job creation for the nation’s economy. Upon completion of the six-month program between the mentor and mentee, the induction ceremony is a celebration of the relationship the participants have created, and the strides mentees have made in growing their businesses. Participants are officially inducted as members of the American Academy of Entrepreneurs and recognized as an exclusive group of business leaders who are embraced by GrowFL and the Edward Lowe Foundation for their commitment to their businesses and entrepreneurship in their home state.

“I feel so fortunate to be a business owner working in the state of Florida, given the many opportunities available to support small business growth.  The opportunity to participate as a mentee in the Academy program came at a pivotal time for GRACE Aerospace.  I had an incredible mentor, who had tremendous business experience, military experience, and a psychology background,” said Pauline Sevigny, president of GRACE Aerospace. “Through our discussions, I was able to tap into all these skill sets to improve my business and strengthen employee relationships.  Although the program has ended, I know that the relationship with my mentor will continue.”

This esteemed group of eight mentors and nine mentees join others inducted into the Academy from Louisiana and Michigan. Inductees will be invited to gather for an annual celebration hosted by the Edward Lowe Foundation at Big Rock Valley in Cassopolis, Michigan.

“For any second stage entrepreneur looking for someone to talk to, that has likely walked a mile – or ten – in your shoes, I highly recommend this program. Thoughtful questions will be asked of you to drive introspection and will help create positive momentum for your business,” said Sevigny.

The Florida business leaders inducted into the American Academy of Entrepreneurs are:

Applications are open to participate in the next AEE program, slated to begin in June. To participate as a mentee, you must be a second-stage business owner with at least 6 employees and $750,000 in revenue.  For mentors, you must currently be or have previously owned and exited a second-stage business and are willing to sponsor a mentee to participate. To apply as a mentor or a mentee, visit https://growfl.com/business-growth-program/american-academy-of-entrepreneurs/.